Confession the first: I took a film noir class at university and, for the most part, hated it.

Crime fiction has never grabbed me. I forget characters’ names (particularly if they have nicknames or their first and second names are used interchangeably); I inevitably lose track of who is on which side; and by the time a character is reintroduced, I seldom remember why they were involved in the first place. And what’s with the constant descriptions of every piece of furniture?!

Confession the second: It took me about 3 reads of the first 2 chapters before I decided not to give up on this book.

Enough of my shortcomings as a reader. Admittedly, I’m glad I stuck with it.

Farewell, My Lovely is the story of Philip Marlowe, a private detective who is corralled into the company of the less-than-obsequious Moose Malloy, who, in search of his lost love Velma, shoots and murders a black man in a bar. While in search of Malloy, Marlowe digs his teeth into a case involving jewel thieves. Inevitably, the plots merge.

Despite my resistance, Chandler’s descriptions, replete with stunning metaphors and turns of phrase, allowed me to cast aside my issues with over-exposition and enjoy the ebb and flow.

The verdict? I’m glad I gave it a whirl. Since Farewell, My Lovely is widely considered Chandler’s best work, however, I’m in no rush to delve further into his bibliography.

Roald Dahl is, needless to say, best known as the author of books for children. This collection of short stories is easy on the whizzpopping, frumpets, and strawbunkies, but his subtly sinister grown-up world is equally enthralling.

The beauty of Dahl’s short stories is his innate talent for saying the most when he says nothing at all. Massive chunks of story line are told through every ellipsis, of which there are many. Rather than telling you exactly what is happening, Dahl creates the setting, throws in a few hints about his characters, and leaves you to deduce the rest.

Another aspect that makes these stories so enjoyable is his ability to impart a sense of impending doom for every character. They may have sinned, have misbehaved, but when their comeuppance comes a-calling, we cringe and gasp as they are served their just desserts.

Though it is not part of this collection, you can read Dahl’s short story The Man From the South here. It’s a personal favourite and if you’ve seen Tarantino’s section of Four Rooms, you may well recognise it. 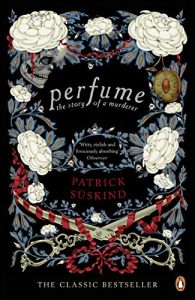 Perfume is the story of Jean-Baptiste Grenouille, an orphan of 18th Century Paris. Rejected by many a wet maid, the solitary outcast finds his way through life as an apprentice and wanderer. His superior sense of smell soon leads him into the beguiling world of perfumery, with myriad consequences.

Süskind’s refreshing omnipresent narrator is not afraid to change angles, focusing on the story from a different character’s viewpoint. Similarly, when characters move in and out of the protagonist’s life, their sub-story is tied up, satisfying our curiosities and allowing us to move on with Grenouille. When events take place that involve him, it is often not mentioned explicitly but, through the eyes of our demi-protagonists, we can deduce his involvement.

Despite his incontrovertible aromatic talents, the ogre-esque Grenouille is an odourless outcast and near-servant whose passions are distilled into something more sinister. His homicidal tendencies are no secret (its subtitle is “The Story of a Murderer”), yet Süskind paints Grenouille with such subtle nuance that his actions never appear threatening, nor could we describe Grenouille as a sympathetic character.

True to its name, the book is replete with olfactory visions and odorous descriptions of the world that surrounds Grenouille. Guiding us through a sensory experience of life in Paris and beyond, Suskind expertly weaves together a storyworld of aromatic brilliance.