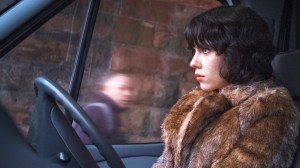 This week on the BBC Culture Studio, Alastair Harkness and I reviewed Jonathan Glazer’s (overblown) Under the Skin, (the hopeless) video game adaptation Need for Speed starring Aaron Paul, and made a quick mention of Terry Gilliam’s The Zero Theorem.

(Why yes, I did forget to post this before the live show on Thursday.)

You can listen to the repeat today, Sunday, at 2-4pm on BBC Radio Scotland. Alternatively, tune in to hear our reviews on BBC iPlayer anytime in the next 7 days.

Make sure you listen from the beginning and catch Mark Cousins talk about The Story of Children and Film and his upcoming season at Edinburgh Filmhouse, The Cinema of Childhood.

Have you seen Under the Skin? What did you think?