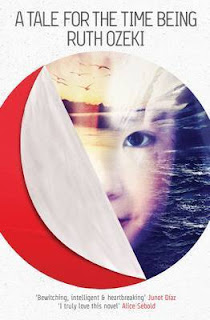 Whether you are in search of lost time or a time being to share it with, this fine novel from Ruth Ozeki is a good place to start.

Part diary, part narrative, the story reproduces the pages of teenager Nao’s journal, scribbled on the insides of a hacked French copy of Proust’s À la recherche du temps perdu (In Search of Lost Time). Across several years and an ocean, forlorn writer Ruth is its finder. After a few pages, it becomes clear that the book itself is Ruth’s experience of finding the diary, attempting to understand its deeper meanings, and making footnotes to explain its many Japanese words and phrases.

As readers, it is our job to decide whether Ruth is, in fact, a not-so-subtle stand-in for the author herself. She is a woman trying desperately to understand Nao and her world, to find out where life took her after the tsunami took the diary she has left behind. Did she really exist? Are these words truth or fiction?

Nao is a curious character, full of life despite her struggles with bullying peers and a suicidal father. She’s smart and engaging, at ease with technology and at once loving and becoming frustrated by her family. Some of her best moments are spent with her great-grandmother, a Buddhist priest named Jiko, in her temple, or reading, second-hand, her father’s favourite Western Philosophers. All of these concepts build towards a greater thematic arc.

Ruth is leaner as a character, filled with self-doubt and frustration in the face of writing difficulties and a keenly felt intellectual and physical imprisonment. Her husband, Oliver, has had to move to a remote Canadian island for health reasons. Their physical and emotional distance from the outer world is brought into sharp relief as they go about their simple lives on this hostile rock, hemmed in by storms, waves and wolves: all of which makes their story more remarkable. Like her or not, Ruth is the lens through which we learn about Nao, an integral reader within the story.

Often they are overused as a conduit to the writer’s journey, there is lots to learn through these two, particularly Oliver, but their expositional conversations are at times over-stretched. Intentionally or otherwise, there is little warmth between them. An inversion takes place: as Ruth, as a character, becomes less believably human, her obsession with Nao’s story becomes all the more immediate.

Ozeki’s storytelling is masterfully precise, weaving storytelling elements which reappear or transform later in the book, keeping the reader on their toes. At some points these are a little overwrought: this is not a larger-than-life story; however the rest of the story makes up for these concessions.

The simple, delicate prose and gradual build of Nao’s personality are the real gens of this novel. It is not until towards the end that Ozeki really plays with the idea of authorship, but her writing will guide you there. You can never be certain what you’re reading in this book; all its characters and its author are constantly tugging the rug beneath your feet. And that’s what makes it truly refreshing.

Buy A Tale for the Time Being at The Book Depository.