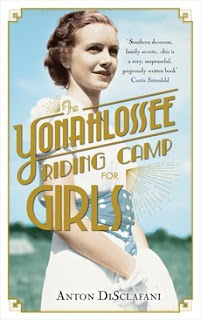 Like many before her, Anton DiSclafani’s debut novel draws on her childhood. Initially set in her summer home of North Carolina, the author’s love of horseback riding backdrops part of this story of a high society teen at brink of the Depression. Sent away to The Yonahlossee Riding Camp for Girls, Thea Atwell’s family secrets and misdemeanours remain a mystery as her new boarding school life unfolds, her past slowly revealed amidst a tumultuous time coming to terms with her banishment.
Family, horses, and boys make up the revolving cast which concerns this bored teen as she balances riding school tensions and debutante drama with undercharged sexual encounters. Southern decorum rubs up against forays into romance that struggle to hit upon any meaningful suspense. Norah Ephron contended that women aren’t interested in the specifics of sex, but prefer to read about lust – a fact which initially works in this novel’s favour but becomes overused. DiSclafani’s prose is descriptive to a fault, overreaching, languid, and consequently dragging out a loose and often repetitive plot. The treacherous road to womanhood described here is unfamiliar and uninviting.
Review originally published by The List.
Buy The Yonahlossee Riding Camp for Girls from The Book Depository | Amazon.