The Host’s aliens are amorphous white globs sprouting tentacles like one of those globes with the light that licks your fingers. Their world is slick and sterile, a “perfected” version of the world as we know it today. The human race has been inhabited – literally – by these spindly beings: pacifist, kind, and overflowing nice intentions; excepting, of course, the requirement that native species die in order that they live, using their bodies as a vessel. So far, so creepy.

Uninhabited humans are exiled, on the run from the alien race and fighting to keep their autonomy. After being caught, our typically “feisty” heroine Melanie’s (Saoirse Ronan) body is implanted with a host named Wanderer. In a rare case, she is able to fight against and manipulate the new form that has invaded her body – all of which is acted out through a series of echoey, clumsy, and embarrassingly poorly-written voiceovers. As the aliens, led by Seeker (Diane Kruger), attempt to raid her memories and find the whereabouts of the human resistance, Melanie somehow co-opts her host into an escape plan, before being systematically stripped of her personality in order that we might enjoy the simperings of her host.

Saoirse Ronan, looking serene and perfected in Host-buffed skin, does her best with a bad script. The story is a wandering, aimless mess, its sprawling chase elements over-complicated by the worst love triangle in recent years. Too many hot boys really spoil the broth: almost threesome kissing scenes, even moreso. Melanie receives numerous unnecessary kisses and slaps in the face, keeping the run-time ticking upwards and ratio of scenes with plot development ticking downwards. Meanwhile, overblown dramatic losses and repetitive poetic love-heals-all speeches work together with a complete lack of pacing to make this a resistance and a folly that seems to last an eternity.

Much like these host figures, the film is a shapeless mass of good looks and empty meanings. The result is stupid, ridiculous, and – worst of all – boring.

Robot & Frank sees old film school friends, first-time feature director Jake Shreier, and writer Christopher D. Ford, team up with Frank Langella on a one-of-a-kind project of digital versus paper and motherboard versus heart.
Set in a near but undefined future, ageing retired thief Frank (Langella) lives a solitary life as he slips slowly into the grips of dementia. At first it may seem like your typical crotchety Grandad finds love story, but Frank has a darker past, and his fondness for visiting the library – and its last remaining human librarian, Jennifer (Susan Sarandon) – is more than a simple subplot. This is a film about being put out to pasture and the loss of tangible things.
Tired of dealing with Frank’s foul temper, son Hunter (James Marsden) installs a caretaker robot in his father’s home, much to the chagrin of Frank and distant daughter Madison (Liv Tyler). The machine voiced by Peter Sarsgaard, what follows is a sweet, subtle tale of friendship. Wry wit and a twist on the old buddy caper formula veers this away from a treatise on ethics, though the subject is used to comic effect, as one man and his selfless robot find their feet in a mutually agreeable friendship. As Frank revives past loves, thievery and otherwise, the story develops into a heartfelt exploration of memory and time.
Lead actor Frank Langella has spoken about working with first-time directors, Robot & Frank being the latest of his six collaborations with new filmmakers in the past ten years. “There is something terrific when you get to be my age to be gained by thinking you don’t know anything. I was once a 26 year-old actor… I like to give young people a piece of rope. If they hang themselves, they hang themselves. But none of them have.”
In fact, Langella worked closely with the filmmakers on the script forRobot & Frank. “It was one of the most original scripts I’ve been offered, [but] it still needed to go somewhere and relate to a man of my age, so I sat down with the writer and the director and we talked about what a 70 year-old man is feeling – because they couldn’t possibly know. They incorporated a lot of that into the movie.”
“I thought the premise, the characters, and that sort of sad, sweet, funny goal of the picture was so original. They just don’t come along that often.” 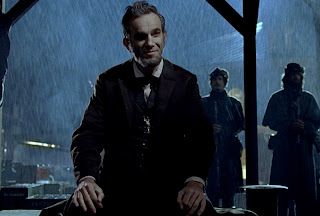 You can hear them at the top and bottom of the show, streaming here, with lots more great content in the middle including Ian Hoey on the film to digital transfer, and Pasquale Iannone on the Filmhouse’s upcoming Roman Polanski season.

Have you seen Lincoln or Zero Dark Thirty? What did you think?